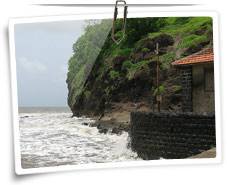 Surrounded by hills & forests, the towns of Dapoli and Harnai encompass long coastal lines and a varied flora & fauna. Both the towns are 15 km apart from each other and are known for a scenic natural greenery. Harnai is known for a calm beach, highly attractive for meditation, and dotted with palm trees. While, Dapoli is a small hill-station in Ratnagiri district in Kokan region of Maharashtra.

Harnai draws a number of adventure lovers to enjoy Swimming, Dolphin Watching, Boating through Backwaters, etc. While on a honeymoon tour, the couples can spend their romantic evenings watching sunset at Tamasteertha beach at Ladghar. On the other hand, Dapoli is a favourite destination among those who love thrilling activities. Hills at Dapoli are ideal for Trekking in the nearby jungles and Cave Exploring. Dapoli is also famous for long walks through the plantations of Mangoes, Betel nuts, Cashew nuts and Coconuts.

The simplest and best way to get in Dapoli or Harnai is by Road. Dapoli lies at a distance of about 240 km from Mumbai along NH-17 (Mumbai-Goa Highway) & 180 km from Pune.