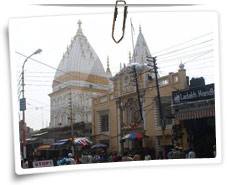 The City Of Temples

Enveloped in the peaceful and the blissful aura, Jammu is a great pilgrimage destination of the Hindus. Dotted with numerous temples, each having its own unique legend, Jammu is popularly known as the 'city of temples'. Jammu also has gurudwaras, dargahs and churches.

Some of The Main Attractions of Jammu

This is the most important pilgrimage centers of Jammu visited by millions of devotees every year. The shrine of Vaishno Devi is dedicated to the Mother Goddess. The shrine is in the form of a cave and is located at a great height in the Trikuta Hills.

Peer Koth is a revered pilgrimage site located on the Circular Road in Jammu. The shrine of Peer Khoh is a cave with a self-manifested Shiv Lingam.

Dedicated to Lord Shiva, the Ranbireshwar temple was built by Maharaja Ranbir Singh in the year 1883. The sanctum sanctorum of the temple enshrines a 7.5 ft high central Shiva Lingam and twelve 15 cm high crystal Shiva Lingam.

Built in 1860 in honor of Lord Rama, the Raghunath Temple is one of the main attractions of Jammu. The inner walls of the sanctum sanctorum are adorned with gold sheets on three sides. There are several other temples located near the Raghunath Temple.

Peer Baba is an important Muslim pilgrimage site but is visited by the Hindus and the Sikhs also. It is the Dargah of a Muslim saint, Peer Budhan Ali Shah.

Ziarat Peer Mitha is a mosque housing the tomb of Pir Ziarat, a saint who was popularly known as Peer Mitha.

It is an ancient temple offering picturesque views of the Tawi River. It is located behind Bahu Fort.

Do visit the Protestant Church on the Wazarat road as it is the oldest church of Jammu. It has its own unique charm.

How To Reach Jammu

The nearest airport is in Jammu. The regular flights from here connect Jammu with the main cities of India.

Jammu Tawi is the most important railway station of Jammu, which connects the state with all the major cities of the country by regular trains.

The state is efficiently connected to the major cities of India such as Delhi, Amritsar, Ambala, Ludhiana, Jalander, Pathankot, Shimla and Manali by a good network of roads.