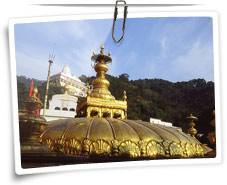 Occupying an ideal place in the foothills of the captivating Himalayas, Kangra is a land of glorious history. Kangra is a city in the Kangra district of the state of Himachal Pradesh. The city of Kangra is famous for its beautiful temples, which are many in number. As a pilgrimage center, Kangra has an important place in the hearts of the Hindus. The history of Kangra dates back to the Vedic times.

Some of The Most Famous Attractions of Kangra

The Jwalamukhi Temple is a highly revered Hindu pilgrimage located in the wonderful Kangra Valley. The temple is one of the Shakti Peethas in India. The   legend associated with this temple goes that after the Daksha Yoga Bhanga, Lord Shiva put the burnt dead body of Sati(his consort) on his shoulders and started moving here and there in anger. Seeing Lord Shiva's ire, the other Gods started worrying about the grave consequences of it. And in order to save the earth from his wrath, Lord Vishnu began to cut the limbs of the dead goddess Parvati. The places where the limbs fell became the holy centers known as Shakti Peethas. It is believed that the tongue of the dead Goddess fell at the place where the Jwalamukhi temple stands today. The flames that come out of the openings in the earth's surface in the temple are believed to be the manifestations of the Goddess. These flames are worshiped.

The Radha Krishna Temple is famous for its murals of Lord Krishna and Goddess Radha.

Located in Bhaniar in the Kangra district, the Bhaniar Shiva Temple attracts many devotees.

Kanjesar Mahadev Temple is a Shiva temple set in a refreshing environment in the Palampur area.

Sidh Bairag Lok Temple is a beautiful temple consecrated to Lord Shiva. It is also located in Palampur in the Kangra district.

Masroor is a small town located only at a distance of 15 km from Kangra. This town is renowned for its elaborately carved temples. Come to Masroor to treat your eyes to a group of 15 monolithic rock-cut temples, which were built in the 10th century.

From March to June

How To Reach Kangra

The nearest airport is at Gaggal located 30 km from the Kangra Valley.

There are two railway stations in Kangra namely the Kangra Station and the Kangra Mandir Station. There is also a luxury train here which runs from Pathankot to Palampur. A ride in this train offers picture perfect views of the snow covered Dhauladhar range.

Kangra is accessible from different parts of India by road such as Delhi, Chandigarh, Amritsar and Manali.