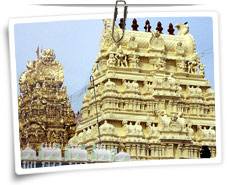 Some of The Main Attractions of Kanchipuram

It is an intricately carved temple dedicated to Goddess Shakti. It is one of the most important pilgrimages of Kanchipuram. The temple was built by the rulers of the Chola Empire in the 14th century.

The Seat Of Sri Adi Sankara

The seat of Sri Adi Shankar in Kanchipuram is known as Kanchi Kamakotti Peetham. It is visited by thousands of devotees every year.

Another architectural gem in Kanchipuram, the Sakkiswarar temple is located in close vicinity of the Kamakshi Amman Temple.

It is an ancient temple built during the reign of the Pallavas in the 7th century. The temple was built in honor of Lord Vishnu. One of the prominent attractions of the temple is the inscriptions depicting the battle between the Pallavas and the Chalukas.

It is one of the most attractive temples in Kanchipuram, which was built in the 8th century.

Dedicated to Lord Shiva, the Ekambareshwar temple is one of the oldest temples in Kanchipuram. Initially its foundation was laid by the Pallavas and later it was given a face-lift by the Cholas. The most notable feature of the temple is its towering Rajagopuam (57 m), which is considered as one of the tallest towers in South India. The temple has eleven stories. Also noteworthy are its fabulous sculptures. The temple complex houses numerous shrines, mandapams, Gopurams and Tanks.

How To Reach Kanchipuram

The nearest airport is located at Chennai.

Kanchipuram is easily accessible from Chennai, Chengalpattu, Tirupati and Bangalore by rail.

Kanchipuram is well connected to the main cities of South India by road.

A variety of hotels are easily available in Kanchipuram.

Scan the bazaars of Kanchipuram for the wonderful handicrafts like silk saris, fruit baskets, candle stands, jewelry boxes and idols of gods and goddesses made in copper, bronze and brass. Shopping is a great experience in Kanchipuram.