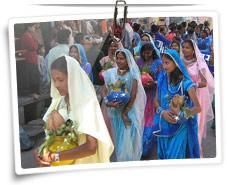 Real India With Its Roots Inside The Simplistic Structure

Tired of loud parties, excursions and adventure sports? Visit the rural side of India for amazingly refreshing holidays. Beautiful modern stone houses in amazing countryside blended with rich culture and heritage, rural retreats in India are perfect destinations for your relaxing vacations depicting the colourful and lively traditions. With above 70% population residing in more than 6 million villages, India is a place known for its rich traditions of art, craft and culture.

All these factors collectively aim at the sustainable tourism development of the country. Rural tourism is promoted in the major villages based on rich traditions, crafts, accommodation, cuisine, hygiene and other basic amenities, their accessibility, environmental issues (pollution, eco-fragility, etc.), safety, law and order situation etc.

A few major rural destinations of India are:

The state of Rajasthan is considered the capital of Rural Retreats in India because of its vibrant culture, colourful handicrafts, lively folk songs and dances etc.

A few major rural retreats in Rajasthan are:

Home to the Bhil tribes; Banswara has its name derived from 'Bans' or bamboo trees; founded by Maharaja Jagmal Singh; bounded by Udaipur and Chittorgarh; also known for a rich wildlife variety. The local people celebrate festivals like Holi (famous for Gair Dance), Ami Egyaras (colourful fair marked by the traditional dance of the Bhils armed with bows, arrows and swords) and Ghotia Amba Fair (held in March, dedicated to the Pandavas of the epic Mahabharata).

A small town in sun-drenched sands; a miniature Rajasthan with all its colour, warmth and tradition; literally means the hill fort of Bar; known for its rich crafts, dances and music. People actively participate in the Tilwara Cattle Fair (March-April), Nakoda Parasvanath (Dec-Jan, the birth anniversary of Parsvanath), Veeratara Mela (dedicated to goddess Vakladevi) and Khed Fair (Aug-Sep).

Founded in 1620 AD by Churu, a chieftain of the Jats, Churu is renowned for the grand Kothar Haveli and Kanhaiya Haveli, beautiful paintings, the Katli River in the northeast etc. Churu is frequented for its extraordinary rural ambiance.

Situated on NH-11, 54 km east of Jaipur, Dausa is an ancient town of archaeological importance. Visited for a rarest collection of stone images of some of the principal Hindu gods and goddesses.

This old historic city on the main route from Kabul and Delhi to Deccan, is located at a close proximity to Gwalior, Agra and Bayana. It witnessed a few important Mughal wars of succession.

This picturesque village is frequented or a majestic fort, Quila of Dundlod, built in 1750 AD. The Diwan-e-Khas audience hall is in well maintained state. The cultural heritage of splendid Rajasthan is also well preserved here.

Nurtured by the Sukri River (a tributary of the Luni River), Jalore was the 12th century capital of the Chauhan Rajputs. It was ruled by a number of dynasties. Situated at the foot of the Suvarnagiri hill, Jalore has several forts and palaces. Two of the greatest poetic works in any Indian language, (Kuvalayamala and Kanhad Dev Prabandh) were also composed in Jalore.

This princely state was established in 1838 AD. It lies in the south-eastern region of Rajasthan and is blessed with several rocky but water-laden verdant landscape. People visit the place for its exquisite pre-historic cave paintings, massive forts, thickly wooded forests and exotic wildlife variety. The nearby area contributes a major share to the production of citrus fruit in the country.

Besides Jhunjhun, Khetri, Nathdwar, Nawalgarh, Ramgarh, Ranakpur, Siliserh, Tonk etc are several other rural retreats of Rajasthan. These palaces are most famous for their regional handicrafts, tie and dye fabrics and furnitures. A few of them also serve as local markets for wool, millet, gram (chick-pea), cattle, salt and cottage industries that include handloom weaving, pottery and leather manufacture.