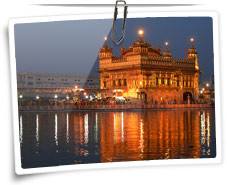 Amritsar is synonymous with the Golden Temple, the most revered shrine of the Sikhs. However, this holy place is visited by people of different religious backgrounds. The term Amritsar is derived from two words; 'amrit' meaning nectar of immortality and 'Sarovar' meaning pool. Amritsar has several Sikh pilgrimages. Amritsar is the administrative headquarters of the Amritsar district of the state of Punjab. Amritsar holds sheer religious importance for the Hindus also as it is believed that it was the place where Goddess Sita, the consort of Lord Rama, gave birth to twins Lava and Kusha.

Originally known as Hari Mandir (Temple of God), the Golden Temple attracts devotees from across the globe. The dome of the temple is made of pure gold, that is why it is called the Golden Temple. The temple structure stands on 67 sq feet of marble and is located in the middle of a Sarovar. The temple was built by the fourth Guru of the Sikhs, Guru Ram Das. The temple enshrines the holy scripture of the Sikha, the Sri Guru Granth Sahib. There is an old Jubi Tree located in the north-west corner of the temple complex, which is believed to have special powers. This tree was planted around 450 years ago by the first priest of the Golden Temple.

It is also one of the famous Gurudwaras of Amritsar, which has 84 steps leading to a deep well(bauli). It is believed that taking a bath in this well enables one to attain enlightenment.

Built by the two philanthropists from Amritsar, the Durgiana Mandir is a beautiful temple dedicated to Goddess Durga. Apart from the main shrine of Goddess Durga, the temple complex also houses the temples dedicated to Bhairon and Lord Hanuman. There is a unique tradition followed here during the festival of Navratras. According to the tradition, parents dress up their sons as langoors during the festival to please lord Hanuman.

It is a wonderful temple built in honor of Lal Devi, a great female saint who lived in Amritsar during the 20th century. It is believed that if the women who wish to have children offer prayer at this temple, they are blessed with children.

Beautiful handicrafts are available in Amritsar such as colorful dress material, rugs, woolen blankets and sweaters.

The Rajasansi airport at Amritsar connects it to the main cities of India like Delhi by regular flights.

There is a railway station at Amritsar, which connects it to the main cities of the country.

A good network of road make Amritsar easily accessible from most of the places of India.