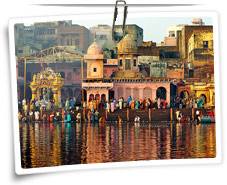 Mathura is synonymous with Lord Krishna as it is his birth place. This is the place, where each and every corner has some or the other story of Lord Krishna to tell. These stories portray Lord Krishna in several roles such as a god-child, a prankster, a model lover, a divine hero and the Supreme Being. Considered an extremely holy city, Mathura is located in the state of Uttar Pradesh. Mathura is the blessed land where the lord spent his childhood, adolescent hood and the last years of his life.

During the Dwapara Yuga, Lord Krishna took birth as the eighth son of the Yadava prince Vasudeva and his consort Devaki. Devaki was the cousin sister of Kansa, the then ruler of Mathura. It was predicted that the eighth child of Devaki would kill Kansa. After listening to this prediction Kansa put Devaki and Vasudev behind the bars and killed their seven children. However, when the eighth child Krishna was born Vasudev secretly took him to Gokul where he grew up.

Krishna Janambhoomi Temple is the most important attraction of Mathura and is also an important pilgrimage for the Hindus. The temple marks the birth place of lord Krishna. The temple is beautifully adorned with the pictures of the lord. The walls are also depict the story of the lord's birth. It is believed that around 5000 years ago Lord Krishna was born here in a prison. There is a stone slab in the temple, which is believed to be the site where the Lord was born.

Located on the eastern banks of river Yamuna, Dwarkadish Temple is dedicated to Lord Krishna. Constructed in 1815, the temple leave visitors enchanted with its mesmerizing paintings and carvings. The festival of Janashtami is celebrated with great enthusiasm in the temple.

Potara Kund is the place where the mother of Lord Krishna used to wash his clothes.

Renowned for its architectural beauty, Gita Mandir attracts many a tourist.

Rangbhoomi is the site where Lord Krishna fought with his maternal uncle Kansa. The battle culminated in the defeat of Kansa. After killing Kansa Lord Krishna freed his parents, Vasudev and Devki, from the prison where they were kept by Kansa.

Carved meticulously in marble, the Mathura Krishna Balrama Mandir was built in the year 1975.

The Government Museum of Mathura is famous for its rich and rare collections of sculptures of the Mathura school. The museum is also used for research and study work. Some of the attractions displayed here are terracotta work, ancient pottery, paintings and copper, gold and silver coins. It is believed that the first Buddha image was made here.

If you wish to feel the spirit of Mathura, then come here during the festivals of Holi and Janmashatmi. Mathura is famous the world over for its celebration of these festivals. According to the tradition of Mathura, Holi is first celebrated in the temples before celebrating it with each other. It is considered highly auspicious o first play Holi with Lord Krishna.

Mathura is also famous for a sweet called 'Peda', which is available in different flavors. Another milk product of Mathura which you must try is 'Khurchan'.

The nearest airport is Kheria(Agra) located at a distance of 62 km from Mathura.

The trains from Mathura connects it with the main cities of the country like Delhi, Agra, Jaipur, Gwalior, Kolkata, Hyderabad etc.

Mathura is well connected to the various important cities of UP and its neighboring states by road.