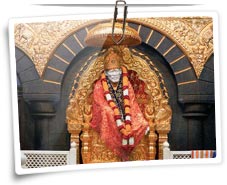 Shirdi is a holy place where the revered saint Sai Baba lived and performed numerous miracles. The very name Shirdi symbolizes the power of faith in the almighty that resides in the hearts of human beings. The town of Shiridi is located in  Rahata Tahasil in Ahmednagar District of Maharashtra. The town also houses a temple dedicated to Sai Baba. The temple has a beautiful idol and the samadhi of Sai Baba, which is visited by devotees in great numbers. The temple was built by Shreemant Gopalrao who had unwavering faith in Sai Baba. Shiridi is an important pilgrimage center of the Hindus and is visited by tourists from across the world.

Located in front of the samadhi of Sai Baba are the two silver pillars, which are beautifully decorated with amazing designs. The life-sized idol of Sai Baba is carved out of Italian marble, which was enshrined inside the temple in 1954. There is an assembly hall in front of the temple that houses numerous articles, which were once used by Sai Baba. The beautiful pictures hung on the walls of the first floor of the temple depict the life of Baba.

Other Attractions of Shirdi

It is a beautiful temple where Sai Baba was welcomed when he came to Shirdi for the second time.

It is a holy place where Sai Baba was seen when he came to Shiridi for the first time. This place is believed to be the gurusthan(seat of a teacher)of Sai Baba. It is believed that no prayer goes unanswered at Shri Gurusthan Mandir.

Dwarkamai used to be the abode of Sai Baba when he came to Shiridi for the second time. It is located adjacent to the temple. Here you can see the shila(stone) on which Sai Baba used to sit.

It is the wonderful garden where Sai Baba used to spend a lot of time. He used to water the plants and used to rest under the Neem tree. During the times when Baba was alive there used to be a pit in the garden where Baba used to light a diya. Now the pit has been converted into a marble deepgriha(lighthouse) with a glass box in which the deep incessantly burns.

There are three other temples here, which are dedicated to Lord Ganesha, Shani devta and Lord Mahadev respectively. The beauty of these temple is notable.

Shiridi is a famous pilgrimage of the Hindus offering a variety of accommodation options. From five-star hotels to budget hotels, all are available in Shridi.

The sacred town of Shiridi is well connected to the cities of Maharashtra and the neighboring states.

Shiridi is from October to February.