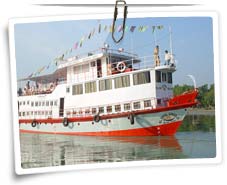 Sailing Through The Largest Estuarine Delta In The World

Experience a different kind of sailing down the river swamps in Sunderban. The largest mangrove forest in the world, Sunderban offers a perfect combination of relaxing travelling on the motor launch. Located in south of Bangladesh (about 130 km from Kolkata), the forest was established as a National Park on May 4, 1984 and was declared a world heritage site by the World Heritage Committee of UNESCO on December 6, 1997.

The entire region of Sunderban is ensconced between Rivers Brahmaputra and the Ganges- the two great Indian rivers, and River Meghna in Bangladesh. Covering an area of about 10,000 sq km, the two-third portion of the forest lies in Bangladesh and the rest one-third in India. Being a beautiful estuarine delta, Sunderban is full of Mangroves (tropical trees found near water, whose twisted roots grow partly above ground).

Tourists are served local dishes specially and tastefully cooked by the trained local chefs. Much variety is not possible because of the remoteness of the area, yet best possible food is provided under hygienic supervision.

Being located at a close proximity to the Bay of Bengal, Sunderban experiences very high humidity. The monsoon (mid-June to mid-September) receives heavy rainfall. The best season for cruising here is between October to March.