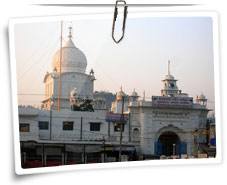 Founded by the tenth Sikh Guru Govind Singh Ji, Paonta Sahib is a pilgrimage center of the Sikhs and the Hindus holding a great historic significance. Wrapped up in mesmerizing scenic beauty, Paonta Sahib, a small town, was a home to the tenth Sikh Guru Govind Sing Ji for around four years. The town is hemmed in by Sal forest and is located on the banks of the Yamuna river.

Yamuna Temple is an ancient temple having its own charm. It is located near the Gurudwara Paonta Sahib and is visited by pilgrims from all parts of the country. The temple was built in honor of Goddess Yamuna.

Jubbarhatti is the nearest airport located at a distance of 145 km from the town of Paonta Sahib.

Yamunanagar is the nearest railway station, easily reached by covering a distance of 56 km from Paonta Sahib.

Paonta Sahib is well connected to all the parts of Himachal Pradesh by road.

Some of the best accommodation options in Paonta Sahib are the Hotel Citizen, Hotel City View, Hotel Clock Tower and Ganga Lodge.