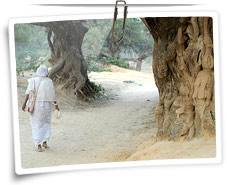 The very name Vrindavan conjures up images of Lord Krishna who mesmerized the people here with his miracles. Located 15 km from Mathura in Uttar Pradesh, Vrindavan is the celebrated land deeply associated with the life of Lord Krishna, especially his youth when he used to spend glorious time with Gopis and his beloved Radha. It is a holy place attracting devotees of Lord Krishna from across the globe. Vrindavan is dotted with around 4000 temples(dedicated to lord Krishna), some of which are ancient. The very experience of visiting Vrindavan is enlightening. Vrindavan can be visited throughout the year.

Some of The Famous Attractions of Vrindavan

Dedicated to Lord Krishna, Shri Banke Bihariji Temple is the most famous temple of Vrindavan. It is one of the oldest temples, which was rebuilt in 1921. The sanctum sanctorum of the temple has a beautiful idol of Lord Krishna known as Thakur Ji. The idol of the Lord here is black and is beautifully decorated with flowers and jewelery. The tour to Vrindavan is incomplete without visiting this temple.

Vrindavan Parikrama is a customary walk on which the devotees embark generally on Ekadashi(the eleventh lunar day of the waxing and waning of moon). It is believed that performing Vrindavan Parikrama earns you boundless good fortune. The path of the Parikrama goes around the town. The walk generally takes 2-3 hours.

Reflecting the marvellous architectural style of the medieval period, Govinda Dev Temple was built by Raja Man Singh in 1590.

Shahji Temple is famous for its exquisite art architecture, sculptures and twelve single piece spiral columns. The temple houses the renowned Basanti Kamra, which has amazing ancient chandeliers and paintings.

Although there are several gardens in Vrindavan but the Seva Kunj garden and the Nidhuban deserve mention. They are the gardens where Lord Krishna used to spend hours together with Radha and gopis.

Do visit this temple to treat your eyes to the magnificent glass work.

Agra is the nearest airport located 67 km from Vrindavan. The regular flights from the airport connects Agra to major cities like Delhi, Mumbai, Varanasi and Khajuraho.

Vrindavan is connected to Mathura and other main cities of India by road.