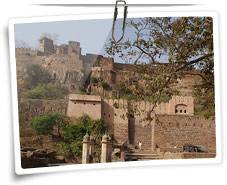 Ranthambore National Park offers a great opportunity to wildlife lovers to witness an enchanting drama of nature. The Sanctuary is famous for its tigers and a variety of other wildlife. It is located in the Sawai Madhopur district of Rajasthan. The Park was established as the Sawai Madhopur Game Sanctuary in 1955 by the Government of India, and came under Project Tiger scheme in 1973. Later in 1980 it became a National Park.

Ranthambore National Park is the only dry deciduous tiger habitat in the world. Once a hunting ground of the erstwhile Maharajas of Jaipur, now the Park is one of the famous wildlife destinations of India. Tourists from across the globe come here for a wildlife treat. Sprawling over an area of 392 sq km, the Park has a glorious history which reflects in its fort.

Ranthambhore National Park also boasts of rich flora. Trees like Banyan, Dhok, Mango and Pipal are found in plenty here. The landscape of the park is dominated by shallow lakes, gentle slopes and plateaus.

The other attractions within the boundary of the Park are Ranthambore Fort, Jogi Mahal(a forest guest house), Bakaula region( a region of dense forest interspersed with several water bodies), Lakarda and Anantpura(the promising sites for sighting sloth bears), Raj Bagh ruins, located between the Padam Talao (lake) and the Raj Bagh Talao).

Getting around in the Park

The government organizes canter and jeep safaris twice daily, at dawn and early afternoon. Private vehicles are not allowed inside the Park.

Jaipur is the nearest airport.

Sawai Madhopur district is well connected with Delhi, Mumbai and Jaipur by rail.