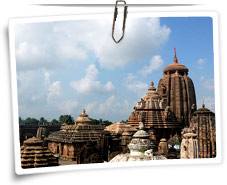 Some of The Major Attractions of Bhubaneshwar Are

Lingaraja Temple is an important and unique temple of Bhubaneshwar, which is dedicated to Harihar or Half Shiva and Half Vishnu. The sanctum sanctorum of the temple enshrines the deity known as 'Tirubhuvaneshwar', which means 'Lord of the three worlds'. The temple was built during the period of 1090 AD to 1140 AD. Some of the structures were added later to the temple. The outer walls of the temple are festooned with beautiful figures of birds, animals and humans and heavenly deities.

The history of the Vaital Delhi Temple dates back to the 8th century. Dedicated to goddess Parvati, the temple has the idol of the goddess with skull garland in her neck, holding weapons in her arms. The exterior walls of the temple are simple but the interior of the temple is decorated amazingly.

Built in honor of Lord Shiva, the temple was constructed during the 10th century. The wonderful gateway and the tower of the temple are noteworthy.

It is an arresting temple encompassing four small shrines at the corners, two enclosure walls and a tank. It was built in the 11th century.

Udayagiri and Khandagiri are located 6 km from the south of Bhubaneshwar and are famous for their architectural wonders; rock-cut caves. The Hathi Gumpha or the Elephant Cave in Udayagiri is really worth a visit.

The domestic airport at Bhubaneshwar connects it with major cities like Delhi, Chennai, Kolkata, Vishakhapatnam, Varanasi and Nagpur.

The train service from Bhubaneshwar connects it to almost all the major cities of India.

The national highways connects Bubaneshwar to almost all the parts of the country.

Being the capital city of Orissa, Bhubaneshwar is dotted with several hotels falling into different categories. From luxury to low-prized accommodation options, all are present in Bhubaneshwar.