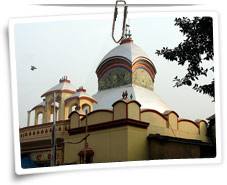 Acclaimed for its hypnotic Hindu temples, mosques, churches and Jain temples, Kolkata is the capital city of the state of West Bengal. People from different religious backgrounds inhabit the land of Kolkata. The rich cultural heritage of the city beautifully reflects in its religious structures.

Kalighat Temple is one of the 51 Shakti Peethams of India and is visited by the Hindu devotees in large numbers. It is believed that it is the place where the various parts of Sati's body had fallen in the course of Lord Shiva's Rudra Tandav. The temple was built in the 12th century.

The Birla Temple at Kolkata is known for its architectural fineness and is visited by people from far and wide. This relatively new addition to the religious structures of Kolkata has a great charm.

Considered to be the oldest Church in Kolkata, Armenian Church is located in the Armenian Street. Constructed in 1764, the Church is one of the known attractions of Kolkata. The assembly is conducted here only thrice a week. There is a Tomb outside the Church, which is said to be of 'Reza Bibi'.

One of the oldest structures in Kolkata, the Maghen David Synagogue is located on Jewish Synagogue Street in Kolkata. Its foundation was laid by Elias David Joseph Ezra in honor of his father. The tower of the Synagogue will surely leave you spell bound with superb views of the city.

Located on the banks of the river Hooghly, the Belur Math reflects the marriage of different architectural styles. It was built in the year 1899.

Truly a visual delight, the Parasnath Jain Temple is famous for its mirror, glass and mosaic work. Located in the Shyambazar, the temple was built 150 years ago in honor of Sital Nath.

The prominent feature of the Nakhoda Mosque is its brightly painted dome, which has been fashioned into the shape of an onion. It is located on the Chitpur road. This is the biggest mosque in Kolkata.

Gurudwara Badi Sangat is an important pilgrimage for the Sikhs. It is said that Guru Nanakdev ji stayed here when he was returning from Dacca to Punjab.

Take your pick from a range of handicrafts and hand looms available in a wide variety of shopping destinations in Kolkata. From beautiful cotton saris to household items, all are available in the markets of Kolkata.

Netaji Subhash Chandra Bose International Airport at Kolkata connects it to the various cities of India and major countries in the world.

Kolkata is easily accessible from almost all parts of India by rail.

Kolkata is well connected to the cities of West Bengal by road.

Being the capital city of the state of West Bengal, Kolkata is dotted with a variety of accommodation options. Ranging from Luxury hotel to budget hotel, the city offers all.