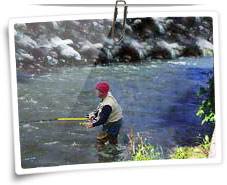 Blessed with numerous coastlines and inland waterways, India is a perfect destination for all types of angling and fishing holidays. Fishing is a great business and an adventure sports in India during spring and summer season. The 'Trout' fish were first brought to India from England in 1880. The credit for introducing the brown and rainbow trout to the streams of India and making it a hub for anglers goes to the British.

The season in Hill Stations runs from April to October. While in plains, the months from September to March are considered the best. There are a few tributaries and water channels near the mainstream beats, which provide the opportunity of fishing throughout the season.

Today, in India the sport of angling is emerging with a fast pace. Trout fishing in the rivers and ice-fed mountain streams is considered as a great sport. Mahseer, Brown Trout and Rainbow Trout are the most favourite species of fish among anglers. These are commonly found in fresh water lakes.

The most popular destinations for fishing are:

As per the existing Indian protection laws the fish is allowed to be caught but must be released.

For angling/trout fishing, one must carry a light-weight two to three metre Rod with an eight cm reel will suffice, hooks, line, etc. One can find a number of adventure tour operators in India that provide excellent tented accommodation facilities along with all the required equipments.