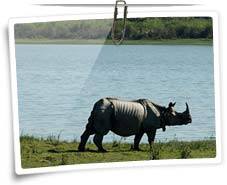 The Treasure House Of Wildlife

Come winter and the Kaziranga National Park gets flooded with tourists from across the world. Kaziranga National Park is located in the Golaghat and Nagaon districts of the state of Assam. The Park is a World Heritage Site known for the endangered Great Indian One-Horned Rhinoceros. It boasts of the world's largest population of One-Horned Rhinoceroses.  In fact the Park is the oldest National Park in Assam, which also has the highest population of tigers among the protected areas in the world. It was declared a Tiger Reserve in the year 2006. The Park has also been considered as an Important Bird Area by Birdlife International for conservation of avian species.

The natural beauty of Kaziranga National Park encompasses the swamps, tall elephant grass(measuring up to 6 feet high), rugged reeds, marshes and shallow pools. The Park has the beautiful Brahmaputra river on its north and the Karbi Anglong Hills on its south. The Park has inspired many a author and has been the theme of many songs and documentaries.

Sprawling over an area of 430 sq km, the Park provides shelter to around 35 mammalian species, including 15 endangered species. There are nine primate species in the Park. The fully grown up one-horned rhinoceros usually has a height of two meters and weigh more than two tonnes. At present there are around 1000 Rhinoceros in the Park. Another notable fact about the Park is that it has the highest population of Wild Asiatic water buffalo and eastern swamp deer. Other wildlife species sighted in the Park are tigers, jungle cats, fishing cats, leopards, Indian grey mongoose, large Indian civet, Bengal Fox, Hog Badger, sloth bear. Here you can also spot two of the world's largest snakes namely Reticulated Python, Rock Python and the world's largest venomous snake King Cobra.

In order to move around the Park, visitors can opt for a jeep safari or an elephant safari. To enjoy your wildlife safari to the hilt, don't forget to carry your binoculars along.

The most favorable time to visit Kaziranga National Park is from mid-November to early April.

How To Reach Kaziranga National Park

The airport at Jorhat is the nearest airport located at a distance of 97 km from the Park. The other airport is situated at Guwahati.

Furkating is the nearest railway station located 75 km from the Park.

The Park is well connected with the main cities of Assam by road.