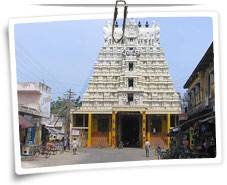 Ramanathaswamy is a beautiful temple visited by many a devotee throughout the year. It is believed that after defeating the demon king Ravana, Lord Rama worshiped Lord Shiva at the same place where the Ramanatha Swamy temple stands today. One of the twelve Jyotirlingas is present inside the temple. The Shiva Lingam here was installed by the Lord Rama himself. This temple has a great mythological importance as it is believed that its foundation was laid by the Lord Rama himself. Reflecting the richness of the Dravadian style of architecture, the temple is known for its largest temple corridor in India. The 1219 exquisitely carved pillars of the temple deserve mention.

Dedicated to Lord Hanuman who was an ardent devotee of Lord Rama, the Hanuman Temple is famous for its 'floating stone'. This stone was used for the construction of Ram Setu, the bridge between India and Sri Lanka.

Perched at the highest point on the island of Rameshwaram, the Ramjharoka Temple is the sacred land having the imprints of Lord Rama's feet.

Located 8 km from Rameshwaram, Dhanushkodi derived its name from Lord Rama's bow. All the temples at Dhanushkodi fell prey to the horrible cyclones in the year 1964. The only temple left unharmed is the Kothandaramaswamy Temple.

Scan the bazaars of Rameshwaram for beautiful silk saris and other impressive handicrafts fashioned out of palm leaves, beads and sea shells. The shopping experience in Rameshwaram is truly rewarding.

The nearest airport is at Madurai city.

A good railway network connects Rameshwaram with the major cities of South India.

Rameshwaram is easily accessible from places in and around it by bus and taxi.

Various accommodation optins are available in and around Rameshwaram.