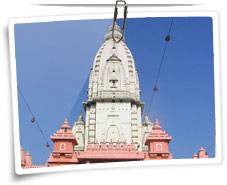 The City Of Light

Varanasi is one of the most important Hindu pilgrimages, which attracts millions of tourists every year. In fact it is one of the oldest cities in the world. Varanasi is synonymous with spirituality and Hinduism. It is a land dotted with numerous temples, ashrams, ghats, Buddhist stupas and Jain temples. Varanasi is also connected with Buddhism and Jainism. Symbolizes age-old Indian civilization, Varanasi is located on the banks of the holiest river in India, Ganga, in the state of Uttar Pradesh.

Varanasi, the city of legends, derived its name from the two streams namely the Varuna(on the north side of the city) and the Assi(in the south). Varanasi is also known as Banaras or Kashi. The word Kashi has been originated from the word 'Kas', which means 'to shine'. It is believed that Varanasi was once resided by Lord Shiva and his consort Goddess Parvati.

The famous personality Mark Twain said the following line in praise of Varanasi: “Banaras is older than history, older than tradition, older even than legend and looks twice as old as all of them put together”.

Dedicated to the Lord Shiva, Kedareshvara Temple is a renowned temple of the city. It enshrines a self-manifested stone linga.

There are around 100 bathing ghats in Varanasi. Some of the most important ghats are  the Asi ghat, Dasashwamedh ghat and Manikarnika ghat and Panchganga.

Holding great religious importance for the Buddhists, Sarnath is a holy place located around 10 km from Varanasi. It is the place where Lord Buddha delivered his first sermon. Another attraction of Sarnath is the Ashoka Pillar, which was erected in front of the main stupa where the great king Ashoka meditated.

Located 14 km from Varanasi, Ramnagar is famous for its Palace, which was once the residence of the Maharaja of Varanasi. The palace houses a museum displaying the royal palanquins, dresses, swords etc. Ramnagar is also known for its Dussehra festival. Two beautiful temples namely the Durga temple and the Chhinnamastika temple are also located in Ramnagar.

Overlooking the sacred Ganges, Chunar Fort is located 40 km from Varanasi. It has a glorious history.

From September to March

A wide variety of hotels are available in Varanasi.

How To Reach Varanasi

The holy city of Varanasi has an airport which connects it well with the main cities of India like Delhi, Mumbai, Khajuraho etc.

There are two railway stations in Varanasi namely Varanasi Junction and Varanasi City. They connect the city with the major cities of India such as Delhi and Kolkata.

Varanasi is easily accessible by road from the various cities of the country such as Delhi, Kolkata, Chennai and Bangalore.