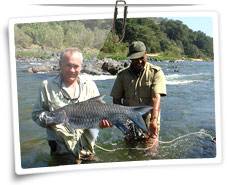 Mahseer are handsome fish inhabiting the fast flowing river environments, especially the rivers originating from the Himalayas, and flowing ultimately into the Bay of Bengal. This most spectacular fish can easily swim upstream against rapids at over 20 knots and can grow up to 125 lbs. The fast current of the river makes them extraordinary strong, so that they put up a memorable fight when hooked.

Mahseer fish, an endangered animal, lives up to an age of 20-25 years. It is a cold water fish and it lives in a highly oxygenated water with rocky bed. Being a migrating fish, it moves to the warm water during winters. It also has great smelling sense therefore it can detect food (mainly fish & aquatic arthropods) from quite a distance. Mahseer fish is an ultimate swimmer and the largest specimen even caught was 121 lbs. It is known to be the toughest among the fresh water sport fish. It gives a terrific fight and has earned the reputation of the underwater tiger.

There is only one kind of Golden Mahseer- the 'Barbus tor putitora' and it lives only along the Himalayas. The fish has elongated body and pointed snout. Its inter orbital space is flat while the jaws are of equally sized. Barbels are in two pairs with the rostral barbel shorter than the maxillary. It is a finicky & moody fish. The body color is golden, grey on dorsal side & reddish- yellow fins.

The best fishing destinations are the less explored remote areas, mainly in northern India. Several camps are organized for the anglers. Rivers originating from towering snow-clad Himalayas are ideal for Mahseer Fishing. There are also plenty of Goonch, popularly known as Catfish.

Major destinations for Mahseer fishing are:

There are several angling sanctuaries in India, which offer training sessions for the local people.

The best time for Mahseer fishing in India is in Autumn (from September to November), when the rivers become clear after the monsoon, and in Spring (from March to May) when the early monsoon rain raises the level of the rivers again.