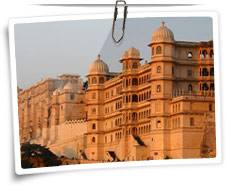 An Inspiration For The Imagination Of Poets, Artists & Writers

Visit Udaipur, the city of lakes, and enjoy the romance in the cool breeze, azure water lakes and the lush hills of the Aravails. The fourth and the last capital of the state of Mewar, Udaipur is one of the most romantic cities in India. This lovely city is marked with splendid lakes, beautiful buildings, temples and palaces with marvelous architectural styles. Popularly known as 'Kashmir Of Rajasthan', the city was established in 1559 by Maharana Udai Singh on the banks of the calm Pichola lake.

Located 374 km from Jaipur and 259 km from Jodhpur, this lively and vibrant city is also the centre for performing arts, craft and its famed miniature paintings. Nurtured with three lakes of Pichola, Fateh Sagar and Umaid Sagar, the city is bounded with the hill fortresses of Kumbhalgarh and Chittor. The wall that surrounds the old city has five gates, namely Suraj Pol or Sun Gate to the east, Chand Pol or Moon Gate towards northwest, Hathi Pol or Elephant Gate to the north, Delhi Gate or Delhi Darwaza to the northeast and Kishan Pol to the south.

The True Essence of Udaipur Culture

Craft Bazaar: Known as Shilp Gram, this bazaar is situated 3 km from Udaipur city and exhibits a number of art and craft patterns of all the states of western India. From 15 December to 25 December, the Directorate of Tourism organizes an annual festivel here, which is a treat for the visitors interested in village crafts.

Mewar Festival: This festival is organized on April 7-8 to welcome the spring season. One can see various Rajasthani songs, dances, processions, devotional music and fireworks at Mewar Festival. A procession of colorfully attired women carrying images of the goddess Gauri can also be seen on this festive occasion.

Located along side the Pichola Lake, the City Palace is considered the most charming attraction of Udaipur consisting majestic pavilions, terraces, rooms, corridors and hanging gardens. The construction of the palace was initiated by Maharana Udai Singh. Hathi Pol or the elephant gate serves as the entrance to the Palace. Once it was a custom with the Maharanas to weigh themselves at this gate in gold and silver and distribute them to the public. The Peacock Square or the Mor Chawk is famous for its walls that are decorated with vibrant blue peacock mosaics in glass.

It boasts of being the biggest temple of the city. Built in 1651, the temple depicts typical Indo-Aryan architectural patterns and sculpted images.

Built on top of Moti Magri or pearl hill, this memorial was built in the memory of the great Rajput king Maharana Pratap. The memorial has a bronze statue of the Maharana and is located near the Fateh Sagar Lake..

Surrounded by several hills on three sides and the Pratap Memorial on the northern side, Fayeh Sagar Lake was built by Maharana Fateh Singh. Boating is a popular activity in the lake and a boat shaped cafe in the middle of the lake is its prime attraction.

Also known as the 'Garden of the Maids of Honor', this ornamental garden was the place where the royal women used to relax and go for a stroll. This beautiful garden has several fountains, pools and marble elephants.

Besides, Pichola Lake, Ahar (the ancient capital of Sisodias), Gulab Bagh (rose garden) and SajjanGarh are several other amazingly beautiful destinations that make Udaipur a favourite destination among tourists.

The Dabok Airport (25 km) is the nearest airport, which is connected to Delhi, Jaipur, Jodhpur, Mumbai and all such major cities by air.

Udaipur is connected to cities like Delhi, Chittor, Ahmedabad, Jaipur, Ajmer and Jodhpur by train. Apart from that, the Palace On Wheels is available for those looking for royal journey.

The State Transport and other private operators provide regular bus services to several cities. Udaipur, being situated on the National Highway 8, is easily accessible by road.

September to March is considered the best time to visit Udaipur. It is the best place to enjoy a cruise on the lakes and see the majestic palaces. Udaipur is truly a treasure trove of monuments and museums.