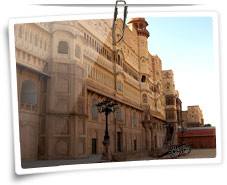 Welcome to the imperial fortified city speckled with sand dunes and timeless appeal of royal aura. Surrounded by a 7 km long besieged wall with five gates, Bikaner is situated in the north of Rajasthan on an elevated ground. The rich heritage of the city lies in its historical monuments built up in red sandstone. The city was founded in 1488 by Rao Bikaji, a Rathore prince (son of Rao Jodhaji, the founder of Jodhpur). By the time Rao Bikaji died, in 1504, the kingdom was extended to over 3000 villages.

Bikaner served as an important trade route and trade centre to the merchants from West/Central Asia. It also has one of the largest Camel research and breeding farms in the world.

Built in red sandstone and marble, the Junagarh Fort is one of those forts which were never conquered or seized. Raja Rai Singh, a general in the army of Emperor Akbar, built this fort in 1593. It houses Anup Mahal, Ganga Niwas, Rang Mahal and Har Mandir (the royal temple).

Depicting the mixture of Rajput, Mughal and European architectural styles, this palace was built by Maharaja Ganga Singh in 1902. The palace is known for extraordinary latticework, filigree work, a rare collection of paintings and hunting trophies, a huge library and a small museum. The palace has now been converted into a hotel.

Places like the Prachina Museum, Ganga Singh Museum, Havelis, etc. are some other wonderful tourist delights in Bikaner.

This oldest monument of Bikaner was constructed in the 15th century. The major attraction of this temple lies in its mirror work, frescoes and gold leaf paintings.

Situated at Deshnok, about 30 km from Bikaner, this temple is dedicated to Goddess Karni/Durga. The temple, with silver and gold domes, was constructed by king Ganga Singh. Because of numerous brown rats running around the temple complex fearlessly, it is also called 'Deshnok Rat Temple'. People believe that the souls of dead Charans (the devotees of Mata) reside in these rats. One can see these rats offering sweets, grains, etc. to the Goddess during the aarti.

This is the largest fair of Bikaner and is organized at Kolayat (formerly known as Kapilayatan, after the sage Kapil), 50 km from the city, on Kartik Poornima. People gather at all the 52 Ghats to take a dip in the holy water of the Kolayat Lake.

This annual festival is organized by the Department of Tourism, Art & Culture, Rajasthan, in the month of January. The camels, dressed in colourful outfits, dance to the tunes of their owners and trainers. Other attractions of the Camel Festival include the best breed competition, the tug-of-war contest, camel dance, acrobatics, etc.

There are a number of star rated hotels, budget hotels and lodges to meet the demand for all kinds of tourists. One can get excellent accommodation facilities in and around Bikaner with all the basic and modern amenities.

Jodhpur (243 km) and Jaipur (321 km) are the nearest airports that are well connected to the metros cities of India such as Delhi, Mumbai, Kolkata and Chennai.

Being a major tourist destination and important trade route, Bikaner is easily accessible from almost all the major cities of the state and the country.