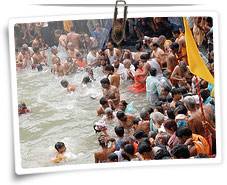 Soaked in holiness, Nasik is a well known pilgrimage center of the Hindus. According to the popular legend Nasik is the place where Lord Laxmana(brother of Lord Rama) cut off the nose of Shupranakha, the sister of Ravana(the demon king). Nasik is also the place from where Ravana kidnapped Goddess Sita(consort of Lord Rama). Nasik is located in the northwestern part of the state of Maharashtra.Situated on the banks of the river Godavari, Nasik offers wonderful views of nature.

Nasik is a land of rich cultural heritage, which magnificently reflects in its ancient and beautiful temples. The sacred town of Nasik also serves as the venue for the world famous fair, Kumbh Mela. Kumbh Mela is an important Hindu pilgrimage drawing millions of visitors from across the world. Kumbh Mela is held four times every twelve years, once at each of these four places—Allahabad, Haridwar, Ujjain and Nashik. The Mela is the largest gathering in the world, which stretches for several days. On the day of Kumbha Mela devotees take a ritual bath on the banks of the river Godavari. Devotional songs are also sung by the devotees, holy men, and women, and the poor are offered food. It is believed that a bath in any of the sacred river rids one of his/her sins.

It encompasses the northern part of Nasik. It is the place where Lord Rama, Goddess Sita and Laxman(Rama's brother) lived for some time. There are five banyan(Vad) trees here, which give the place its name.

It is a beautiful cave located near the five banyan trees in Panchavati. The cave houses the beautiful idols of Lord Rama, goddess Sita and Laxman.

Constructed in the year 1756 by Gangadhar Yashwant Chandrachud, Sundarnarayan Temple is dedicated to lord Vishnu.

Attracting a lot of devotees, Modakeshwar Ganesh Temple houses an idol, which is self- manifested. Dedicated to lord Ganesha, the temple derived its name from the 'Modak', a special Maharashtrian dish prepared from coconut and jaggery. It is believed that lord Ganesha loves this dish.

Ramkund is located in the holy river Godavari. This kund is referred to as the 'Ganges of the South'. According to the legend Lord Rama took a bath in this Kund during his stay in Nasik. Devotees from across the country come here to take a holy dip.

It is a fascinating temple as it was built with black stones in the year 1794. Its architectural beauty deserves mention.

There are several other temples in Nasik, which are both beautiful and famous.

Depending on the needs and budget of tourists, they can choose from a wide variety of hotels in Nasik.

Mumbai is the nearest airport located 185 km from Nasik.

The railway stations at Nasik connect it to the major cities of India.

Nasik is well connected to Mumbai, Pune and other cities of Maharashtra by road.