This short trek runs through Sham, the lower part of Ladakh .The trek will give you a great opportunity to see several ancient monasteries and villages that are rich in agriculture, especially fruit. The Likir- Tingmosgam trek is one of the easiest treks to acclimatize to, as the trail rarely rises above 4000 m. 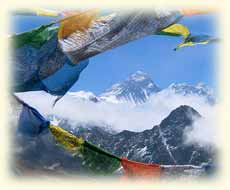 We start the day early in the morning from the Leh. It is 2 hours drive from Leh to Likir following the Indus River. After visiting the famous Likir monastery we begin our trek below a mountain nearby the monastery.

Today our trek is pretty long. We walk alongside the river and trees amidst the gorge to the Rizong monastery. It is worth visiting Rizong Monastery, which is an isolated at the back of a natural amphitheatre and has three main rooms to visit, two with large Buddhas and third with a large stupa. After visiting the gompa, we ascend gradually to the Shushut pass 4000 m. From the pass we have a view of Hemis Shukpachan as well as surrounding peaks. An easy descent towards our camp at Hemis Shukpachan takes a couple of hours. It is one of the major villages of Sham, and the name of the village is derived from the conifers (shukpa cedar or juniper).

From Hemis Shukpachan we go onto a flat ground as far as ill-defined pass alongside the Chortens (stupas). A steep descent will lead us to the right side of the mountains and climb steadily on the slope towards the Mebtak La 3720 m. After taking short rest and enjoying the view from the pass, we head down to the village of Ang. From Ang, we head towards the south on the dusty jeep road to the village of Tingmosgam. Tingmosgam is well famed for its monastery, and is perhaps the most affluent village in the sham valley for its apricots, apples, nuts and beautiful houses.

After a night at Temisgam, we drive back to Leh en route visiting Alchi monastery, the only monastery in Ladakh built on flat ground, well known for its peerless wall paintings.

Today we proceed for Indus Valley monastery tour. We start with a visit to Shey, the ancient capital 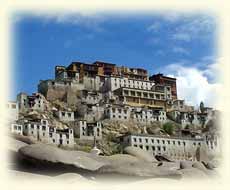 of Ladakh. The monastery here has a huge gold-gilded statue of Buddha Sakyamuni with a large silver lamp burning in front of the statue. Then we visit Thiksey Gompa, an impressive complex rising tier upon tier on a hill above the village. The monastery has a beautiful 30 m high gold-plated statue of Maitreya Buddha, the Buddha of the future. Drive further to visit the famous Hemis Gompa, founded in 1630's by Stag-tsang-ras-pa under the royal patronage of Sengge Namgyall. Hemis is one of the largest and richest gompas of Ladakh. The two-day festival of monastic dance in June-July has raised the reputation of Hemis particularly high. The festival is dedicated to Guru Padmasambhava, popularly known as second Buddha and responsible for spreading Buddhism in the Tibetan world. Later we visit the Stok Palace, the Royal residence of the King of Stok & the Museum that has a rich collection of Ancient Ladakhi artefacts including old Thangkas, precious stones, arms and armoury, the Queen's necklace and the crown of the King of Ladakh among others. Overnight stay at the hotel in Leh.

After an early breakfast, we drive at 0730 hrs to Agra, the erstwhile capital of India under the great Mughals and known for The Taj Mahal. It has always fascinated Indians and foreigners alike. On the way we visit Sikandra (Tomb of Emperor Akbar). At Agra after lunch (own lunch) We visit the incredible architectural excellence of Taj Mahal, built by emperor Shah Jahan in memory of his beloved wife Mumtaz Mahal. Next we visit Agra Fort - Built principally as a military establishment by Akbar in 1565, the red sandstone Agra fort was partially converted into a palace during Shah Jahan's time. Though the principal structure was built by Akbar, many more additions were made by his grandsons. This massive fort is 2.5 kms long and is considered as the predecessor of the Delhi Red fort. After Visiting the fort we drive back to Delhi at 1700 hrs. Upon arrival in Delhi. Finally we will have farewell dinner and later we transfer you to the International airport.