A beautiful trek through a less-frequented area of Ladakh, this route follows the same trail as on the Markha trek for the first 3 days, before entering the high plateau of Changthang, which stretches far into Tibet. The only inhabitants of this desolate wilderness, where the climate is so extreme that you can get sunburn and frostbite at the same time, are nomadic and semi-nomadic people, who live in tiny settlements with their yak, sheep, pashmina goats and a small harvest of barley on which they survive. 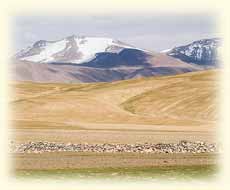 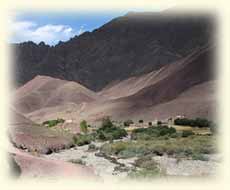 We will leave Leh by jeep to the starting point of the trek at Martselang (3600 m). Along the way, we will visit the first Palace of Ladakh at Shey, following the famous Yellow Sect monastery of Thikse, which houses one of the largest Buddha statues in Ladakh (called the future Buddha). We will then visit Hemis, the largest and most famous Drukpa monastery in Ladakh (built in the early 17th century). After the tour, we will drive to Martselang, where we will meet our crew. Martselang is the entry point into Hemis National Park, where we might get glimpses of such endangered high-altitude animals such as the snow leopard, Tibetan wolf, Tibetan sheep and Golden eagle. From there, we will walk for 2 ½ hours to the small village of Shang Sumdo (3700 m).

Today we will climb steadily through the gorge of Shang, enjoying the magnificent colors and rock formations on view. We will then pass through the small village of Chogdo (4000 m) and cross a few rivers before reaching camp for the night.

A steep ascent leads us up to Kongmaru La (5200 m). From the pass we will get a breathtaking view of the north face of Kangyatse (6400 m), Zanskar and the Karakoram ranges. We then descend gradually to the summer pasture of Nimaling, where the villagers from Marka valley spend the summer with their sheep, goats and yaks, which graze on this lush greenery. The campsite of Thachungtse is further down the valley on the bank of the Marka River at 4000 m.

After yesterday's strenuous walk, today is easier as we walk through the remote Langthang valley, where few other trekkers go. It's only the villagers from Markha, who use this valley as a pasture ground for their animals. From Thachungtse, we will follow the valley down until it divides, cross the river and follow the valley to the left along the Langthang Chu River. The valley down to the right leads to Markha. The Langthang River has a tendency to rise during the day due to the melting of snow in the mountains, and by noon it becomes a dangerous river to cross. An early start in the morning is therefore essential, as one has to cross the river several times. Yakrupal is a nice, green campsite where both the horses and we will have a good meal. 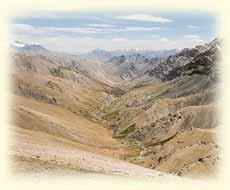 After Yakrupal, we will continue up the valley towards the pass of Zalung Karpo La. From the top of the pass there is a spectacular view of the Zanskar range on one side, while on the other, the highest plateau in the world appears: the Chang Tang plateau stretching far into Tibet, known as the land of the nomads. The trail down is steep and several river crossings will follow to the beautiful and lush campsite of Khar, which will be our home for tonight. Kharnak means "black castle" in Ladakhi, and, situated on a hill above the campsite, one can imagine the former palace of Khar where the king of Kharnak used to live. The ruins of this former kingdom still stand, and the nomads believe it to be haunted. It is said that the nomads in Dat are descendants of the people who lived in Khar and that they for some reason moved to Dat three or four generations ago.

A relatively easy day and a beautiful walk through wide, lush valleys (by Ladakhi standards!). At Tangtse Sumdo the valley divides - the left valley leading to Dat and the right into Zanskar, by the 'Zhunglam trek', where one will get one's feet real wet due to the 80 river crossings! On the way we pass several nomad camps before reaching the tiny village of Dat, a settlement of stone huts and the winter headquarters for the nomads in Kharnak. Here they live from October to December and March to June. The nomads of Kharnak are a colorful and joyful people moving together with their yaks and pashmina goats. In Dat there is also a Monastery, and when the villagers are away from Dat, one or two people ride back on horses every second day to light the candle here.

From Dat we enter the vast land of the Changthang plateau and follow a long, wide valley before taking one of the side valleys towards Yar La. In spring the nomads move with all their animals towards Zara and it can be an unforgettable sight to see 30-40 families moving with their yaks in caravans. It is an easy ascent to this pass. From here it is a short walk down to the pastures of Lungmo Che, where we will spend the night, surrounded by snowcapped mountains, grazing yaks and pastel light.

The trail follows rolling hills towards Yagang, another settlement of stone huts belonging to the Kharnak nomads. A jeep road continues to Zara, the summer headquarters for the nomads in Kharnak. If you go for a visit up here, you will most likely be welcomed with numerous cups of butter tea and probably be invited into the nomads' black tents woven out of yak hair.

It will feel sad to leave this fascinating world, but it is time to return to Leh. From Zara the drive takes us back over the Taklangla pass, the second highest pass in the world. 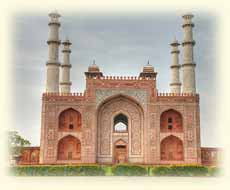