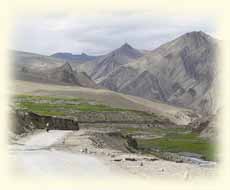 The remote high plateau of Changthang (meaning ‘northland’) stretches from western Tibet into eastern Ladakh. This region, known as the land of the nomads, will give you an experience to last a lifetime. See the nomads’ traditional lifestyle and share a cup of butter tea in one of their black yak-hair tents along the incredible oval-shaped bank of Tsomoriri. The lake changes its turquoise blue color with the light and is surrounded by a picturesque landscape. The area is also an important wildlife sanctuary, harboring snow leopards and wild asses, as well as various species of birds.

Early morning transfer to Domestic Airport to connect the flight for Leh. Upon arrival at Leh Airport our representative would assist you at the Airport and transfer to Hotel. Check in to the hotel. Post breakfast rest of the day for rest for acclimatization. Later in the afternoon a walk around Leh town (3500mtr) includes a visit to Leh Market, Leh Palace, Shanti Stupa & Leh Gompa – This walk shall help us in a getting acclimatized at this height. Overnight stay at the hotel.

From Leh, the drive to Rumtse is an exciting one, with views of the Indus Valley and many monasteries on the way. Day one is easily manageable: we have a short walk on a rather flat terrain to aid acclimatization. We will camp overnight at lush Kyamar, near a spring. 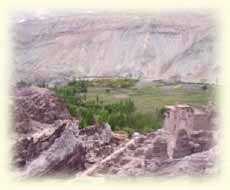 We should be fully energized today with proper breakfast for a challenging day ahead. We begin with gradual ascent towards our first pass of Kumur La (4800 m), which gives a spectacular view of the Changthang range with its colorful rife of mountain. After the pass, we steadily descend towards the base of the next pass. Here we might come across nomads with their herds of sheep, goats and yaks. After a short rest, we set out for Mandalchan La (4850 m). From this pass it’s an easy descend to the camping site at the pastureland of Tisaling.

By now, we are well acclimatized to conquer our third pass, the Shibuk La (4900 m), and about 2-hour journey. From the top of the pass, we have an incredible view of the surrounding mountains and of our next destination, Tsokar Lake. With a breathtaking view to ease our exhaustion, we head down towards the valley accompanied by the shrill whistles of the shy and active marmots, which is characteristic of this harsh region. It’s approximately a 4 hrs walk to the Tsokar basin, and our camp for the night will be the windy Pongunabu.

Today is an easy day, and we follow a dusty jeep road towards Tsokar Lake. Along the salty shores of the lake, we have a rare impeccable opportunity to see some of the endangered migratory birds of the world. From here we carry on along the trail to the right of the lake, keeping to a barren land until Nuruchan, where we will be welcomed by a grassy land with streams nearby.

We have to get set for a tough day ahead. We will cross the icy cold stream in Nuruchan before gradually ascending Horlam Kongka La (4900 m). From the pass, we will have a view of the turquoise blue Tsokar. After an easy 40-minute walk down to Rajungkaru, we will encounter several typical Tibetan nomads with their flock of yaks, sheep and pashmina goats. Following the stream for about 50 minutes, we will enter another nomad settlement. These nomads are of Western Tibetan origin. When the Chinese subjugated Tibet these nomads and their animals faced numerous hardships, fighting biting cold and losing many lives while fleeing into Ladakh from Tibet.

After sharing a cup of butter tea with the nomads, we will continue to ascend the Kyamayuru La (5410 m); this pass is challenging in nature, but the magnificent view from the top makes it well worth all our strenuous efforts. From the pass we descend gradually to the valley towards our campsite at Gyamar Barma (5150 m). Due to the campsite’s high altitude, bad weather can make night temperature freezing.

When we open our eyes in the morning, we will find ourselves amidst a herd of grazing yaks. After breakfast, we head to our next pass, Kartse La (5300 m). Ascending slowly in the thin air of the plateau, we will eventually reach the pass. The trail leads gradually down to the lush green valley of the Gyamar, where we spend our night. 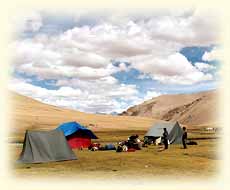 Today, we gradually ascend towards the highest and final pass on the trek. Following the narrow valley until the Yalung Nyaulung La (5450 m), we will see some of the rare flowers and herbs of the Himalayan region. The fragrances will astonish you! To our right we can view snowcapped mountains and from the top of the pass we will also have a view of the lake Tsomoriri, surrounded by snowcapped mountains. We descend steeply for a couple of hours to the Korzok Phu, the summer pasture of the Korzok people. From the pasture, we continue to the Korzok (Tsomoriri lake), the destination of our adventure.

We drive back to Leh along the gorges of the mighty Indus with all these good memories in mind, leaving behind the beautiful lake Tsomoriri.

Today we proceed for Indus Valley monastery tour. We start with a visit to Shey, the ancient capital of Ladakh. The monastery here has a huge gold-gilded statue of Buddha Sakyamuni with a large silver lamp burning in front of the statue. Then we visit Thiksey Gompa, an impressive complex rising tier upon tier on a hill above the village. The monastery has a beautiful 30 m high gold-plated statue of Maitreya Buddha, the Buddha of the future. Drive further to visit the famous Hemis Gompa, founded in 1630's by Stag-tsang-ras-pa under the royal patronage of Sengge Namgyall. Hemis is one of the largest and richest gompas of Ladakh. The two-day festival of monastic dance in June-July has raised the reputation of Hemis particularly high. The festival is dedicated to Guru Padmasambhava, popularly known as second Buddha and responsible for spreading Buddhism in the Tibetan world. Later we visit the Stok Palace, the Royal residence of the King of Stok & the Museum that has a rich collection of Ancient Ladakhi artefacts including old Thangkas, precious stones, arms and armoury, the Queen’s necklace and the crown of the King of Ladakh among others. Overnight stay at the hotel in Leh.

Transfer to the Airport to catch the flight for Delhi. Upon arrival in Delhi we assist you to check in at our Hotel. Later in the afternoon we depart for Delhi sightseeing that includes Humayun's Tomb, Lotus Temple and Qutab Minar. Later we drive back to hotel for overnight stay.

After an early breakfast, we drive at 0730 hrs to Agra, the erstwhile capital of India under the great Mughals and known for The Taj Mahal It has always fascinated Indians and foreigners alike. On the way we visit Sikandra (Tomb of Emperor Akbar). At Agra after lunch (own lunch) We visit the incredible architectural excellence of Taj Mahal, built by emperor Shah Jahan in memory of his beloved wife Mumtaz Mahal. Next we visit Agra Fort - Built principally as a military establishment by Akbar in 1565, the red sandstone Agra fort was partially converted into a palace during Shah Jahan's time. Though the principal structure was built by Akbar, many more additions were made by his grandsons. This massive fort is 2.5 kms long and is considered as the predecessor of the Delhi Red fort. After Visiting the fort we drive back to Delhi at 1700 hrs. Upon arrival in Delhi. Finally we will have farewell dinner and later we transfer you to the International airport.