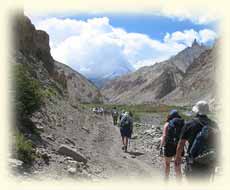 This is one of the most popular and beautiful treks with an easy access. The trail will, in many places, reveal the impact of the collision between the Indian subcontinent and Eurasia, resulting in unique rock formations rife with beautiful colors. The area is home to rare and endangered Himalayan wild lives. This trek also provides an opportunity to glimpse traditional villages and livelihoods of the Ladakhi people.

After an early start from Leh, we will travel by jeep to Spituk, where horses will be waiting to carry our equipment. The trek will begin along an old jeep road into a parched and exposed region, so water and sunscreen are absolutely vital! After plodding through the shattered land for 3-hours, we will enter the lush Zingchen Valley, where the Rumbak River flows into the mighty Indus. Further into the valley lies our campsite, in the two-house hamlet of Zingchen (meaning 'big field'). The rest of the day may be spent relaxing, or even taking a dip in the stream. 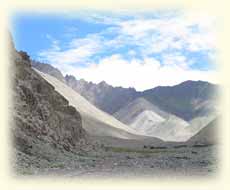 Today we will enter Hemis National Park, where we may be fortunate enough to get a glimpse of wild lives as diverse as the snow leopard, lynx, Ladakhi Urial (a type of goat), arghali (great Tibetan sheep), blue sheep, red fox, Tibetan wolf, dhole (wild dog), marmot and mountain hare. After paying the entrance fee, we will climb gradually through a beautiful gorge that will unveil the imposing Stok Range from time to time. Before reaching Rumbak, we will stop at a teahouse run by women from the village. After a warm cup of tea, we will continue through Rumbak, and pass by the house of Yurutse village, before reaching camp at the base of Ganda La (4545m). From our campsite, we can see a spectacular view of Stok Kangri and the whole of the Stok range.

After a light breakfast, we will begin our 2-hr ascend to Ganda La; views of the lofty Zanskar and Stok Ranges will leave you breathless. The usual chorten and prayer flags mark the top of the pass, where one may see blue sheep and marmots roaming the hills. After a short rest, we will make a gradual hour-long descent to Shingo and break for lunch. We will finish the day by hiking through a spectacular gorge before pitching camp at Skiu (3300m). Within this idyllic village lies an old monastery and ruins of an old castle (once a rest stop for the Royal family on their way to Srinagar).

Following the Markha River, we will hike through the lovely valley on a fairly level path. The trail crosses the river at various points, and passes through winter settlements that contain Lhatos (religious shrines for local deities) and Mani walls (stones inscribed with Buddhist prayers). During peak season, a number of tented teahouses will be open, providing hearty refreshment. After cross the river for the last time, we will arrive in Markha, the largest village in the valley, consisting of around 20 houses, an old monastery and a ruined fort. Note: Water and sunscreen are essential, since the valley is quite exposed.

The Markha valley trail continues past old stone-mills, a ruined castle and the auspicious monastery of Techa, which is proudly perched on a towering cliff that looms above Markha, well worth visiting if we have the energy! The path then intersects the river several times before cutting through the last hamlets in the valley. After leaving the village of Umlung, we will be afforded our first view of Kang Yatse (6400m), which will stay in sight until we cross Kongmaru La. After we break for lunch in the village of Hangkar (the last in the valley), we will press onward to the lovely green pasture of Thachungste, where we will camp.

Today the trail will lead us up to the beautiful plateau of Nimaling, where the people of the Markha Valley brings their herds to graze during the summer months. At 4700m, Nimaling is the highest camp on the trek, giving us spectacular views of Kang Yatse to the right, the Zangskar Range and the Markha Valley below. 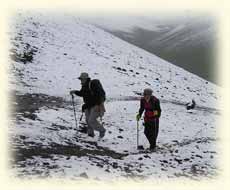 After a hearty breakfast, we will cross Kongmaru La, the highest pass on the trek. Here we have a wonderful view of the surrounding mountains and valleys. The 2-hour descend is quite steep, but will gradually level as we enter Shang Gorge, with its strange and otherworldly rock formations. More river crossings bar our way before we arrive at the sour-spring of Chuskurmo (used in traditional medicine by the Amchi doctors). After a break, we will pass through a couple of villages before reaching Shang Sumdo, where we will spend our last evening together. Enjoying the camaraderie and an excellent beer!

Our spirits lifted by a successful trek, we will enjoy a pleasant 2-hr walk along a jeep road to Martselang, where the jeep will pick us up for Leh. Upon arrival we check in at our pre arranged hotel for overnight stay.

Today we proceed for Indus Valley monastery tour. We start with a visit to Shey, the ancient capital of Ladakh. The monastery here has a huge gold-gilded statue of Buddha Sakyamuni with a large silver lamp burning in front of the statue. Then we visit Thiksey Gompa, an impressive complex rising tier upon tier on a hill above the village. The monastery has a beautiful 30 m high gold-plated statue of Maitreya Buddha, the Buddha of the future. Drive further to visit the famous Hemis Gompa, founded in 1630's by Stag-tsang-ras-pa under the royal patronage of Sengge Namgyall. Hemis is one of the largest and richest gompas of Ladakh. The two-day festival of monastic dance in June-July has raised the reputation of Hemis particularly high. The festival is dedicated to Guru Padmasambhava, popularly known as second Buddha and responsible for spreading Buddhism in the Tibetan world. Later we visit the Stok Palace, the Royal residence of the King of Stok & the Museum that has a rich collection of Ancient Ladakhi artefacts including old Thangkas, precious stones, arms and armoury, the Queen's necklace and the crown of the King of Ladakh among others. Overnight stay at the hotel in Leh. (Breakfast & Dinner)

After an early breakfast, we drive at 0730 hrs to Agra, the erstwhile capital of India under the great Mughals and known for The Taj Mahal It has always fascinated Indians and foreigners alike. On the way we visit Sikandra (Tomb of Emperor Akbar). At Agra after lunch (own lunch) We visit the incredible architectural excellence of Taj Mahal, built by emperor Shah Jahan in memory of his beloved wife Mumtaz Mahal. Next we visit Agra Fort - Built principally as a military establishment by Akbar in 1565, the red sandstone Agra fort was partially converted into a palace during Shah Jahan's time. Though the principal structure was built by Akbar, many more additions were made by his grandsons. This massive fort is 2.5 kms long and is considered as the predecessor of the Delhi Red fort. After Visiting the fort we drive back to Delhi at 1700 hrs. Upon arrival in Delhi. Finally we will have farewell dinner and later we transfer you to the International airport. (Breakfast & Dinner)