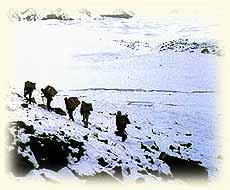 The valley of Sham in the lower part of Ladakh, is celebrated for its beauty and richness during the harvesting season. This trek follows the old caravan route to Lamayuru which diverges from the Kargil-Leh road at the Phatu La. According to legend, Lamayuru was once a lake, which miraculously disappeared by the hand of Lotsawa Naropa.The monastery at Lamayuru built in the 10th century is one of the oldest in Ladakh, and belongs to the Kargyu sect of Tibetan Buddhism. This trek offers not only view of the many natural beauties of Ladakh, but also some of its most famous monasteries and the traditional lifestyle of the natives.

You arrive in Delhi by International flight. After a traditional 'Swagat' (Welcome) our representative would assist you at the airport and take to your hotel for check-in. After some rest have your breakfast at the coffee shop in the Hotel. After breakfast we will go on a guided tour of Delhi at 1100 hrs, beginning with a morning sightseeing trip to Old Delhi and followed by visits to the 1648 Red Fort, India's largest mosque-Jama Masjid and Gandhi Memorial at Raj Ghat.
Afternoon tour includes visits to India Gate & President's House. Later we drive back to the hotel for an overnight stay.

Early morning transfer to Domestic Airport to connect the flight for Leh. Upon arrival at Leh Airport our representative would assist you at the Airport and transfer to the Hotel. Check in to the hotel. Post breakfast rest of the day for rest and for acclimatization. Later in the afternoon take a walk around Leh town (3500mtr). This includes a visit to Leh Market Leh Palace Shanti Stupa & Leh Gompa - This walk shall help us in a getting acclimatized at this height. Overnight stay at the hotel.

We will leave Leh by taxi in the morning for Lamayuru following the Indus River through Sham Valley. After visiting Lamayuru monastery we will pack our backpacks and set off for our first day's adventure. We will follow a stream for a time, and gradually climb up to the pass of Prinkti La (3750m). We will later pass through the small village of Shilla (3700 m) before reaching our campsite at Wanla (3250m),where we will spend the afternoon either relaxing in the sun or visiting the monastery.

Following a dusty road we will reach the small village of Phenjilla (3410 m) and the scattered village of Uri .We will then walk through a narrow gorge until we reach a traditional Rangthak (flour mill) at the far end of the village. The trail will then cut through the village of Hinju (3720 m) roughly 2 km below our campsite in a yak herder 's encampment.

From the encampment we will continue along the trail and ascend the ridge below Kongskil La (4950m). If lucky we will get glimpses of some wild life. We will then climb gradually until we reach Kongskil La where we will be surrounded by dizzying views of the Karakoram and Stok ranges. The descent down the trail is quite steep with loose moraine causing the difficulty--so be careful! The trail then follows the left side of valley floor, passing a yak herders ' hut (4500m), before we reach our campsite. This valley is occupied mainly by the villagers of Sumda Chenmo.

After a short walk and a few river crossings, we will reach the village of Sumda Chenmo. From there we head towards the true left side of the valley, which provides a beautiful view of the village with its lush greenery. Further on the trail cuts through the valley 's wild rose bushes and leads us to another river crossing (this stream originates from the high snow- capped peaks of Photoksar (5685m).Before making a steep challenging ascent over Lanak, we will see Edelweiss and some of the other rare wild flowers of Ladakh. From the campsite, there is a splendid view of Konskila.

We will begin the day with a straightforward climb to Dungdung Chan La (4820m), which offers views of the beautiful vistas of the Stok Range in the east and the Zanskar Range in the south. From the pass the trail gradually descends down a ridge toward the valley continually tapering before reaching the village of Chilling. Chilling is the only village in Ladakh that has provided metalworks such as copper, bronze, tin, silver and iron to the Leh market through the centuries. From Chilling we will drive for about 3 hours along the Zanskar River .We will eventually reach its confluence with the Indus and the easy road back to Leh.

Today we proceed for Indus Valley monastery tour. We start with a visit to Shey the ancient capital of Ladakh. The monastery here has a huge gold-gilded statue of Buddha Sakyamuni with a large silver lamp burning in front of the statue. Then we visit Thiksey Gompa an impressive complex rising tier upon tier on a hill above the village. The monastery has a beautiful 30 m high gold-plated statue of Maitreya Buddha, the Buddha of the future. Drive further to visit the famous Hemis Gompa founded in 1630's by Stag-tsang-ras-pa under the royal patronage of Sengge Namgyall. Hemis is one of the largest and richest gompas of Ladakh.The two-day festival of monastic dance in June-July has raised the reputation of Hemis particularly high. The festival is dedicated to Guru Padmasambhava, popularly known as second Buddha and responsible for spreading Buddhism in the Tibetan world. Later we visit the Stok Palace, the Royal residence of the King of Stok and the Museum that has a rich collection of Ancient Ladakhi artifacts including old Thangkas precious stones arms and armoury the Queen's necklace and the crown of the King of Ladakh among others. Overnight stay at the hotel in Leh.(Breakfast &Dinner).

Transfer to the Airport to catch the flight for Delhi. Upon arrival in Delhi we assist you to check in at our Hotel. Later in the afternoon we depart for Delhi sightseeing that includes Humayun's Tomb Lotus Temple and Qutab Minar. Later we drive back to the hotel for an overnight stay.

After an early breakfast we drive at 0730 hrs to Agra, the erstwhile capital of India under the great Mughals and known for The Taj Mahal. It has always fascinated Indians and foreigners alike. On the way we visit Sikandra (Tomb of Emperor Akbar). At Agra after lunch (own lunch) We visit the incredible architectural excellence of Taj Mahal, built by emperor Shah Jahan in memory of his beloved wife Mumtaz Mahal. Next we visit Agra Fort. Built principally as a military establishment by Akbar in 1565, the red sandstone Agra fort was partially converted into a palace during Shah Jahan's time. Though the principal structure was built by Akbar, many more additions were made by his grandsons. This massive fort is 2.5 kms long and is considered as the predecessor of the Delhi Red fort. After visiting the fort we drive back to Delhi at 1700 hrs. Upon arrival in Delhi we will have farewell dinner and later we transfer you to the International airport.