If you wish to experience spiritually, visit Ladakh Monastery. Sacred places, settled in the scenic locations of the Indian land are some of the best places across the globe, where you can grow spiritually. Choose a Ladakh Monastery tour to ensure an interesting and peaceful visit in the remote locations. 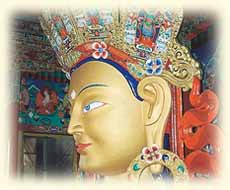 Rest of the day free and for acclimatisation.

After breakfast we drive to Likir and visit Likir gompa situated atop a windy cliff top overlooking the beautiful village of Likir. It was founded in the 12th Century although the present construction dates back to the 18th century as the original one was destroyed by fire. In its courtyard is a yellow-coloured 3 storey high mammoth statue of the Lord Buddha, which was constructed by a resident monk. The top floor has an impressive museum containing old thangkas and weapons used many centuries back.

Then we drive and cross the River Indus and reach Alchi, Ladakh's most loved monastery. Over a century old, its wall paintings are very similar to those of the Tabo gompa in Spiti, Himachal Pradesh. Unlike other monasteries which are usually on a cliff top or cling to a mountainside, Alchi is at ground level and is nestled in the shade of a garden.

After Alchi we have an option to visit the impressive Ridzong Gompa, reached from the road head after a 30-minute uphill walk. It’s an impressive monastery well hidden in the lap of the mountains until you’re face to face with it. It is situated on the mountainside wedged in between 2 ends of a ridge. It is about 100 years old and the name means 'mountain fort' aptly describing this isolated gompa. It also has a nunnery of female monks also.

Finally we reach Lamayuru monastery, founded by Rinchen Zangpo in the 10th century. This gompa is located amidst the massive mountains. The spectacular setting of this gompa and its renowned collection of carpets, thangkas and frescoes has been attracting many people over a long time. It is believed to be the oldest in central Ladakh.
Overnight stay in Lamayuru.

In the morning we visit the Lamayuru monastery to be part of the morning religious ceremony. It’s a very soothing and spiritual experience to be there among these warm and friendly monks. Then drive to Kargil and overnight stay in the hotel.

In the morning after breakfast we drive towards Suru valley along Suru River. Enroute we see the mighty twin peaks of Nun & Kun that are among the most challenging peaks in Ladakh. By evening we arrive at Rangdum plains in Zanskar region. Overnight stay in the tents in the picturesque campsite.

In the morning we start and visit the famous Rangdum Monastery perched on a solitary rock in the middle of the valley. After that we drive to Padum, the capital of Zanskar region. By late afternoon we reach Padum and check in at the hotel for the overnight stay.

Visit various monasteries & villages for 2 days. Stay overnight at the hotel in Padum.

Places that can be visited in and around Padum:
Karsha

We visit the important Monastery of Karsha. Karsha is the largest Gelug-pa monastery in Zanskar which is believed to be founded by the great translator Lotsava Rinchen Zangpo in 10-11th century AD. In the many halls of Karsha one can find some of the best specimens of Mural art. Later drive back to Padum enroute we stop to visit the Kalachakra Gompa where His Holiness Dalai Lama performed Kalachakra initiations.

Sani -Zongkhul
We can drive to Sani village and then to Ating located on the banks of river Zanskar. The jeep is abandoned at Ating and after crossing the bridge start the steady trek to Zongkhul Cave Monastery the founding of which is ascribed to Naropa. Later on the return journey visit the village of Sani then drive back to Padum.

Thongde
We can explore the Monastery of Thongde situated on rocky outcrop. One of the main attractions is the Gon Khang " the chambers of the protectors" of the monastery. Explore the other prayer halls of the Gompa. Later explore the village of Thongde.

Zangla
Drive to northern part of Zanskar valley, Zangla is believed to being ruled still by the king whose Palace stands on hill top Visit the one of the last remaining suspension bridges a remarkable example of primitive engineering. After visit to the Palace, drive further 5-10 minutes to visit the Zangla Nunnery monastery.

Morning drive back to Rangdum. Overnight stay in tented camp.

Morning we drive back to Kargil, on arrival check in the hotel. Later proceed for a short visit of the town, which has some of the finest examples of Turkish style houses. Overnight stay at the hotel.

On our way back to Leh we can visit the Basgo monastery, famous for its Buddha statue. In Leh overnight stay in the hotel.

Day at leisure or option of visiting more monasteries. Overnight stay at Leh.