Explore Ladakh, the land of treks to quench your thirst for adventure. Jhunglam Trek is a feast for the adventurer inside you. Treat the buds with one of the most interesting treks in Ladakh region. Jhunglam trek serves as the combination of beauty and adventure. 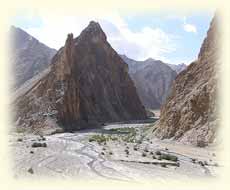 This is one of the most adventurous treks on an isolated route far into the mountains with many rivers to be crossed. It is a real wilderness experience for adventure seekers, and the best period for exploration is from August - October when most of the snow has melted and the roaring rivers are passable.

You arrive in Delhi by International flight. After a traditional 'Swagat' (Welcome) our representative would assist you at the airport and to your hotel for check-in. After some rest, have breakfast the at coffee shop in the Hotel. After breakfast we will go on a guided tour of Delhi at 1100 hrs, beginning with a morning sightseeing trip to Old Delhi and followed by visits to the 1648 Red Fort, India's largest mosque - Jama Masjid and Gandhi Memorial at Raj Ghat. Afternoon tour includes visits to India Gate & President's House. Later we drive back to the hotel for an overnight stay.

Early morning transfer to Domestic Airport to connect the flight for Leh. Upon arrival at Leh Airport our representative would assist you at the Airport and transfer to the Hotel. Check in to the hotel. Post breakfast rest of the day for rest for acclimatization. Later in the afternoon a walk around Leh town (3500mtr)includes a visit to Leh Market, Leh Palace, Shanti Stupa & Leh Gompa - This walk shall help us in a getting acclimatize at this height. Overnight stay at the hotel.

Leave Leh by jeep to the starting point of the trek at Martselang (3600 m.) and start our trek to Shang Sumdo ,a small village at 3700 m .Martselang is the entry point into the Hemis National Park in which we may see endangered high altitude animals like Snow leopard, Tibetan Wolves, the great Tibetan Sheep and Golden Eagle.

Today we trek through the gorge of Shang ,ascending gradually an enjoying the magnificent colors, shapes and rock formations of the gorge. We will pass by the small village of Chogdo before arriving at camp at Lartsa (4600m).

A steep ascent leads us up to Kongmaru La (5200 m.) From the pass we will see a breath taking view of Kangyatse Peak (6400 m), Zanskar and the Karakoram ranges .Then we descend gradually to the summer pasture of Nimaling ,where the villagers of Markha valley stay during the summer season with their sheep, goats and yaks.The campsite of Thachungtse (4000 m) is further down the valley on the bank of the Markha River.

After yester day 's strenuous walk, today is easier as we walk through the remote Langthang valley ,where few other trekkers go. Only the villagers from Markha use this valley as a pasture ground for their sheep, donkeys, yaks and horses. From Thachungtse, we follow the valley own until it divides, cross the river and follow the valley to the left along the Langthang Chu River. The Langthang River has the tendency of rising during the day due to snow melting in the mountains and by noon it becomes a dangerous river to cross. An early start in the morning is therefore essential, as one has to cross the river several times. Yakrupal (4200 m) is a nice, green campsite and a good place to rest.

We will continue up the valley towards the Zalung Karpo Pass (5200m). From the top of the Pass there is a spectacular view of the Zanskar range on the one side, while on the other, the highest plateau in the world appears, the Changthang plateau stretching far into Tibet. The only inhabitants of the Changtang are a nomadic and semi-nomadic people, living in tiny settlements with their animals and a small harvest of barley on which to survive.

Descending own from the Pass, several river crossings will follow and lea us to the right bank of the Changchu River and the camping site of Tilat Sumdo (3750m).

At the crossroads of Tilad Sumdo, it's worth exploring some of the secluded gorges nearby. If fortune strikes there are chances of seeing wild life around, including blue sheep and the rare snow leopard.

Today we 'll have more river crossings than any other day. The day starts with crossing the icy cold river of Changchu and entering into a beautiful narrow valley until a canyon. After several river crossings, the valley narrows and crossing the river becomes much easier. Walking further leads us to a plain with stones opposite a cluster of spectacular rocky needles where two cold streams intersect. Camp at Charcharla base (4400 m)

Following the stream will reveal several impressive gorges. After the third narrowing gorge, leaving the stream towards the left, we finally ascend gradually to the top of Charchar la (4950m). From the pass we will have a fine view of the main Himalaya beyond Padum. We descend steeply along glacial steps to the base of the Pass. After crossing a magnificent canyon towards the left as far as the intersection along the stream to the large river at the campsite of Zangla Sumdo ,we'll have a very beautiful campsite to relax for the night.

With many river crossings downstream into the Zulung valley, we sight the first Zanskari village amidst the greenery of barley fields. The trail goes gradually up as far as Zangla castle an then own for half an hour beyond the Chortens (Stupas),bringing us to the village of Zangla (3370 m). Until 1989,Zangla had its own ruler with control over the nearby villages of Honia, Chazar, Hanumil, Pidmo and Pishu on the far side of the valley. Zangla monastery has its legacy with the Spituk monastery of the Gelugpa sect.

Our day begins with crossing the longest hanging bridge over the Zanskar River. From Pishu the trail ascends gradually to the village of Rinam (3550 m), following the banks of the Great Zanskar River. Along the way, we'll see the stunning monastery of Tongde. Thereafter we will arrive at Karsha (3600 m)an reinvigorate ourselves at the banks of the Zanskar River listening to the musical tune of the flowing water. Karsha monastery Karsha monastery is one of largest monasteries of Gelugpa sect. It is on the hillside with am imposing view of the entire valley. Most of the monks are from the surrounding villages. It is believed that the monastic site was founded probably around the 10th century A.D. It is recommended to visit the monastery to get a holy blessing.

From Karsha we will follow the route to Pipiting village on the dusty road to Padum (3531 m). Padum is the major hub for all the activities of the entire valley and the capital of Zanskar. Here all villagers gather on auspicious days. After arriving at Padum, we once again intermingle with civilization for a day, and it is time to have a complete rest before preparing for the long drive back to Leh.

We start our journey for Rangdum. Upon arrival in to our Private tents. After tea /coffee late in the afternoon we visit the famous Rangdum Monastery perched on a solitary rock in the middle of the valley. After visiting the monastery we drive to Rangdum plains in Zanskar region. Overnight stay in the tents in the picturesque campsite.

In the morning we drive towards Lamayayuru - our next destination via Kargil. After a long drive of about 10 hrs we arrive in Lamayuru and check in at our pre-arranged guest house for an overnight stay.

In the morning before breakfast we visit the Lamayuru monastery to be part of the morning religious ceremony. It's a very soothing and spiritual experience to be there among these warm an friendly monks. Then we drive to Alchi, Ladakh's most loved monastery. Over a century old, its wall paintings are very similar to those of the Tabo gompa in Spiti, Himachal Pradesh. Unlike other monasteries which are usually on a cliff top or cling to a mountainside, Alchi is at ground level and is nestled in the shade of a garden.

After Alchi we have an option to visit the impressive Ridzong Gompa, reached from the road head after a 30-minute uphill walk. It 's an impressive monastery well hidden in the lap of the mountains until you 're face to face with it. It is situated on the mountainside wedged in between 2 ends of a ridge. It is about 100 years old and the name means 'mountain fort' aptly describing this isolated gompa. It also has a nunnery of female monks.

Later we drive to Likir and visit Likir gompa situate atop a windy cliff top overlooking the beautiful village of Likir. It was founded in the 12th Century although the present construction dates back to the 18th century as the original one was destroyed by fire. In its courtyard is a yellow-coloured 3-storey high mammoth statue of the Lord Buddha, which was constructed by a resident monk. The top floor has an impressive museum containing old thangkas and weapons used many centuries back. Finally we reach Leh by evening. Upon arrival in Leh we check in at our pre-arrange hotel for an overnight stay.

Today we proceed for an Indus Valley monastery tour. We start with a visit to Shey, the ancient capital of Ladakh. The monastery here has a huge gold-gilded statue of Buddha Sakyamuni with a large silver lamp burning in front of the statue. Then we visit Thiksey Gompa, an impressive complex rising tier upon tier on a hill above the village. The monastery has a beautiful 30 m high gold-plate statue of Maitreya Buddha, the Buddha of the future. Drive further to visit the famous Hemis Gompa, founded in the 1630's by Stag-tsang-ras-pa under the royal patronage of Sengge Namgyall. Hemis is one of the largest and richest gompas of Ladakh. The two-day festival of monastic dance in June-July has raised the reputation of Hemis particularly high. The festival is dedicated to Guru Padmasambhava, popularly known as second Buddha and responsible for spreading Buddhism in the Tibetan world. Later we visit the Stok Palace, the Royal residence of the King of Stok & the Museum that has a rich collection of Ancient Ladakhi artefacts including old Thangkas, precious stones, arms and armory, the Queen' s necklace and the crown of the King of Ladakh among others. Overnight stay at the hotel in Leh.

Transfer to the Airport to catch the flight for Delhi. Upon arrival in Delhi we assist you to check in at our Hotel. Later in the afternoon we depart for Delhi sightseeing that includes Humayun's Tomb, Lotus Temple and Qutub Minar. Later we drive back to the hotel for an overnight stay.

After an early breakfast, we drive at 0730 hrs to Agra, the erstwhile capital of India under the great Mughals and known for The Taj Mahal. It has always fascinate Indians and foreigners alike. On the way we visit Sikandra (Tomb of Emperor Akbar). At Agra after lunch (own lunch) We visit the incredible architectural excellence of Taj Mahal, built by emperor Shah Jahan in memory of his beloved wife Mumtaz Mahal. Next we visit Agra Fort. Built principally as a military establishment by Akbar in 1565,the red sandstone Agra fort was partially converted into a palace during Shah Jahan's time. Though the principal structure was built by Akbar, many more a additions were made by his grandsons. This massive fort is 2.5 kms long and is considered as the predecessor of the Delhi Red Fort. After visiting the fort we drive back to Delhi at 1700 hrs. Upon arrival in Delhi we will have farewell Dinner and later we transfer you to the International airport.